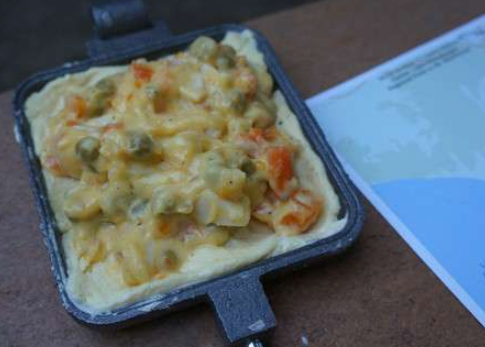 Did you know hobo pie makers are great for more than just desserts? Well, they are! You can make “pot” pies with them, filled with anything you want! You could do a chicken or beef with gravy, a taco style, pizza–whatever you can think of! The equipment is the same for each type of pie you choose to make:

Depending on what you want to put in your hobo pies the crust can vary.

Pizza: pizza dough from a tube
Taco: tortillas that are a little bigger than the pie maker
“Pot Pies”: croissant or biscuit dough
Any type of bread, typically white, for any type of pie

Now, the ingredients for the inside are the most fun! You want them to be a little warm to start, especially if you’re using gravy or a sauce. The outside of the pie will cook faster than the inside so having precooked fillings is important. Here are some ingredient ideas:

Pizza Pie: sauce, pepperoni, sausage, peppers, olives, banana peppers, mushrooms, mozzarella cheese and any of your other favorite pizza toppings
Taco: taco meat, cheddar cheese, tomatoes, chiles, refried beans, or anything else you put on or in a taco
Pot Pies: any sort of chicken or beef with a gravy mix. It can be homemade or bought in the store. You can even use certain types of soup of this, just drain off a little extra liquid.

The method for making these super easy and tasty hand-held dinners are the same, regardless of what you put inside of them! Here’s how you do it: